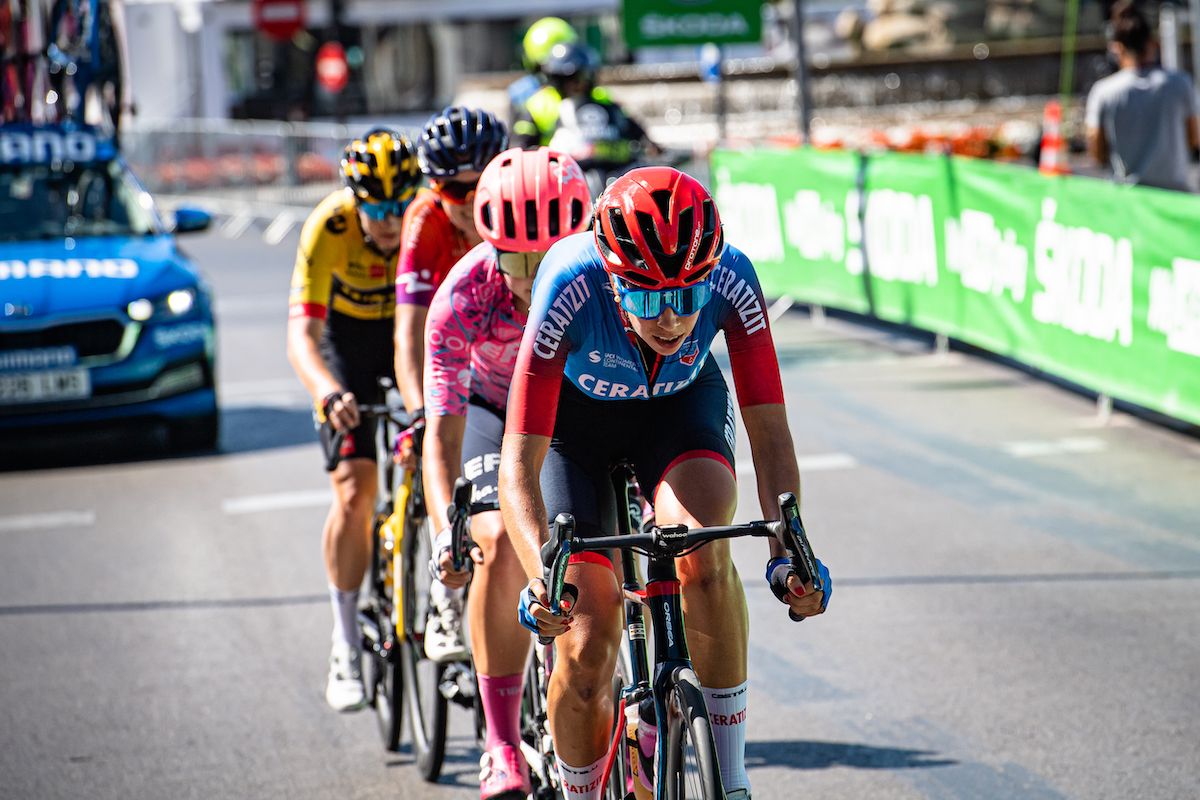 The fifth and final stage of the CERATIZIT Challenge by La Vuelta finished with a fast and furious 17 laps of Madrid, with CERATIZIT-WNT instigating most of the action.

Sandra Alonso, attacking as soon as the official start was given, was able to escape along with a rider from EF Education Tibco SVB. Eventually joined by two other riders, their advantage grew to a maximum of one minute and 30 seconds and they remained out front for the majority of the race, ultimately being reeled back in by the sprinter's teams. Alonso wasn't ready to give up so soon, however, and put in a final attack, seeing her and her breakaway companions split but still holding a 20-second gap as they entered the final 15 kilometres. Back in the peloton, a crash and bike change for Maria Giulia Confalonieri saw Lin Teutenberg and Hanna Nilsson work hard to bring their sprinter back through the bunch while Marta Lach and Laura Asencio prepared themselves for a hectic finish.

Finally caught by the peloton, as Alonso rejoined the bunch Asencio launched an explosive counter-attack, forcing the peloton to chase into the final two kilometres. Confalonieri, now safely in the bunch but out of her preferred position was able to sprint her way to sixth to finish our CERATIZIT Challenge by La Vuelta on a high.

Confalonieri spoke highly of her teammates at the finish: "I think Sandra did a really nice race, which meant we had no pressure in the bunch. The breakaway was strong and they had a good advantage but in the end, there were too many teams that wanted to arrive at the finish for a bunch sprint. Unfortunately, I was caught in a crash with four laps to go, which isn't ideal preparation for a sprint! Hanna and Lin helped me back to the bunch, and the finish was predictably hectic. Marta tried to help me but I was not in an ideal position so I had to do a bit of a comeback in the last kilometre. I think after everything that happened today we can still be proud"

CERATIZIT-WNT Pro Cycling DS Steffen Radochla enjoyed his first Women's Vuelta: "The CERATIZIT Challenge by La Vuelta is my first Vuelta with a women's team. We had five good days! A nice start to the week with the team time trial, but we bought a strong team of sprinters so the climbing stages were not easy. We did our best every day and we closed the race with a long breakaway from Sandra and MG's 6th place. All in all, we bought all of our riders to the finish and we can be happy in the end."